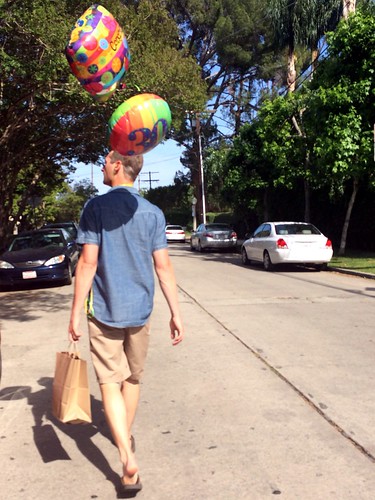 That might sound boring, but I think the boring stuff is the stuff I remember the most.
~ Russell from the movie “Up“.

Sunday we celebrated H’s 30th birthday (which is actually today) with a surprise lunch at a beer tavern and then hanging at a friends’ house, watching the dogs swim in the pool, learning line-dances and singing along to H playing guitar.

It wasn’t the most eventful birthday considering it’s a milestone one, but we’re not great at making extravagant deals out of things. In fact, I’m very under the radar and he’s not really a planner, so that makes for less-than-exciting celebrations… but I think this day, of spending time with friends basically doing nothing special but having drinks around a pool for someone’s birthday, was not only exactly what we needed, but *exactly* what it’s all about.

Like the hokey-pokey but with margaritas & line-dancing & two giant dogs sopping wet with pool water.

When I snapped this picture, I was delighted – it reminded me of the movie “Up” (my dad thought so too as he shared an image from the movie on my FB status). And then I found the quote above…

Because, yeah – celebrating a 30th birthday as if it were any other Sunday hang with friends does sound boring… but I think it was perfect.

I’ve been with H now since we were 18 and just starting college. This year we’re 30, living 3,000 miles from where we met, with our jobs and apartment and dog… together 12 years, married 2. Time freakin’ flies and I can’t seem to do anything to hold it – capture it – brand it into my brain.

We’re different people than when we first met. Better. Watching him play along to 90s songs, jamming out on an acoustic guitar, laughing about the similarities between a Rage Against the Machine song and a Jason Aldean song – my heart just swelled. Like it does when I look at this picture.

I don’t really have the right words to sum it up, so I’ll just say this… the “boring” stuff is what I remember but it’s also what I cherish. If I could live 100 years of just spooning in bed, or taking the dog to the park together, or sitting side by side at a bar counter, eating melt-in-your-mouth burgers — I would be the luckiest.