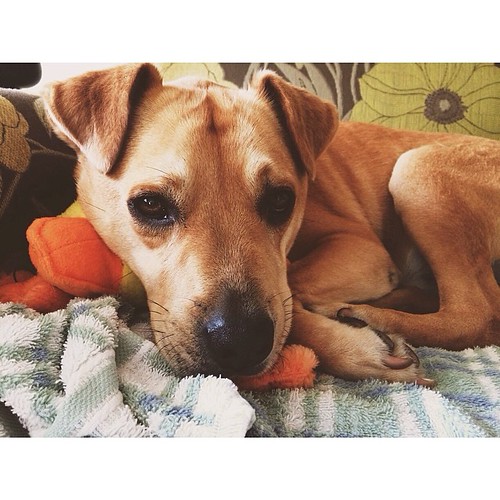 I spend a lot of time online – reading and absorbing. And I’ve seen how other bloggers post link round-ups, but I hesitate to do the same b/c I don’t want to create more entry points to the black hole of the internet. So I’ve decided to have a (hopefully) weekly post where I collect things that have caught my eye, sharing them with you, but mostly throwing down a snapshot of my brain in web-links.

Oh, and it will (hopefully) include a weekly photo of Carter Cash b/c…
Carter Cash.

Last night, we sat in OVER AN HOUR of traffic at MIDNIGHT because the 405 was CLOSED. Happy Mercury retrograde!!!

Abide With Me and Staying Near, by Lindsey Mead (and the quote below) made me feel and think, but I’m finding Lindsey’s writing often does that to me:

Medium: started by the founder of Twitter & Blogger, Ev Williams, a new platform for longer stories. I’ve been thinking about longer stories and how I want my blog to hold space for that kind of writing. Will share if I actually sign up & post on Medium.

As the art critic Harold Rosenberg once wrote: “Being loved is a kind of fame.”
And, in America, we seem to see anonymity as being the polar opposite of what we all believe we value most: authenticity.
Authenticity is this God-term that encapsulates what we as Americans find sacred and it is the heart our culture of romantic individuality.
I’ll define authenticity as that which what we feel is most real, true and original about ourselves.
And authenticity has this interesting correlation with fame.
As in: the more I’m seen and known, the more famous I am, the more authentic I am.
Despite the fact that fame, as we all know, is in its essence a kind of persona or mask and also a kind of un-reality.

(Above quote) Speaking of longer stories, my friend Steve, who is the person who suggested that I should try therapy b/c I would probably enjoy it – is blogging! We have these epic 3-hour-long lunches where we talk & discuss & delve deeper than regular conversations, and reading his blog gives me that same feeling, and though it doesn’t replace our convos, it’s a good bridge till the next time.

I met Jen Lee and watched her film, Indie Kindred, when she toured last year. I felt so special Jen took time to chat with me one on one – it was like she was there just to see me. She’s one of my creative heroes and I’m happy to share Indie Kindred was released in streaming form online this past week – and also, I’m included in the trailer. Weeeeeeee!

I have to admit, when I heard Elise was launching a podcast, Elise Gets Crafty, I felt jelz. Like, really. I want a podcast haha. But I’m only 6 episodes in, and I have to say, where it lacks in polish, it more than makes up for it in awesome information & discussions. It’s a testament to having an idea, launching, and figuring it out as you go – which is more than most people can say. Episode 3 is my fav so far.

West Coast – Lana Del Rey. This song is officially my summer jam. I don’t know many songs that make me want to dance and make out.

Annnnddddddd a few of my favorite link round-ups:
Something Good, by Jill Salahub
Five on Friday, by Kelly Purkey
Web Time Wasters, by Yes and Yes