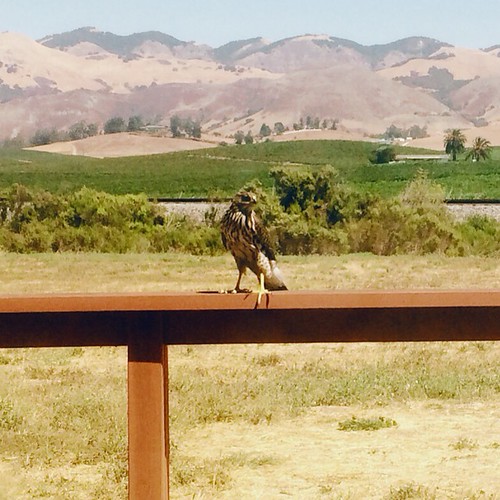 This weekend we were in Santa Margarita for our friends’ wedding (more on that later) and I kept encountering animals.

There were deer on the property. They came into the yard of the house we were staying in, nibbling on grasses, their tails and lips and ears twitching.

I went for a run with another girl staying in the house and we had a group of horses come right out of the field they were grazing in and trot over to us. They came within arms reach and stood there, their muscular bodies taunt but calm, watching us with liquid eyes.

Later on the run, a silhouette of a dog popped up on the horizon. I thought it was a coyote at first, but as it started to run directly towards us, I realized it was a cattle dog. He ran big, looping circles up a hill and back to us, where he joined two girls on horseback and followed them off down the path.

We saw a male deer, antlers flashing in the sun, running through a field of tall grass.

That afternoon, I visited Autry Cellars and while we were chatting with Steve Autry (the owner), his tasting room guy came in and pulled Steve to the front room. A falcon had landed on the deck outside and was perched there, not moving.

There was a very large picture window between all of the people in the tasting room and the falcon on his ledge outside.

Mr. Autry said this was unusual behavior for this type of bird. He sees falcons flying low over the outskirts of the property, but never landing on the main building, especially this close to people. He also pointed out that the bird didn’t have a tag.

Two different times the bird lifted his wings, caught the wind and let it carry him towards the window – testing the pane, knocking into it to see if it was really there. After the second time, he flew away, around the side of the building. Mr. Autry said the bird was outside on another spot, closer to the building than he’d ever seen them before.

When I look up falcons as animal totems, I read this:

When a falcon flies into your life: You are being asked to be vigilant. An opportunity for big positive changes in your life is close at hand and it will require good planning and strategy as well as action on your part. You are reminded that you have all the tools and knowledge to take advantage of this opportunity and that your success depends on your quick reactions. Stay focused and grateful for all that is coming your way. Know that you have the ability to soar high and see things with greater vision!

This could not be more perfect for how I’m feeling since returning from Alaska. It’s as if, all of a sudden, my life is shifting – moving from one level to another – that I am growing or have grown in ways I didn’t realize until this very weekend.

To add to this layer of knowing I have all the tools and knowledge I need to move forward, I read that falcons and hawks serve the same symbolic purpose.

Ever since feathers became a symbol for me, I’ve wished for a hawk feather. In true intuitive fashion, I have no idea what a hawk feather actually looks like, but I thought surely one different enough from the black crow and white seagull feathers in my collection.

Amazingly, hawks represent both focus / day-to-day and big picture / higher-level perspective. Which is exactly where my strengths align for my INFJ Meyers-Briggs type.

A specific way the hawk guidance works is to use a high level and yet clear and focused vision to guide your action. Hawk Spirit Animal

Adding to that, I feel many women in the blogging community who identify as INFJs also see their spirit animal as a wolf. While wolves are incredible animals, I wasn’t feeling them for me. But falcons…

If falcons are your animal totem: You are independent and need to have alone time in order to be happy. You have a sharp mind and are very agile. You know how to mentally work out problems and are always three steps ahead of your peers and workmates. You have the patience to wait in order to get the most out of any opportunity that comes your way. You have impeccable timing and know exactly when to strike for the greatest benefit to yourself.

It seems that I’ve been secretly wishing for hawks / falcons this entire time.

And after that falcon knocked into that window trying to get our attention, I just knew he was there for me.