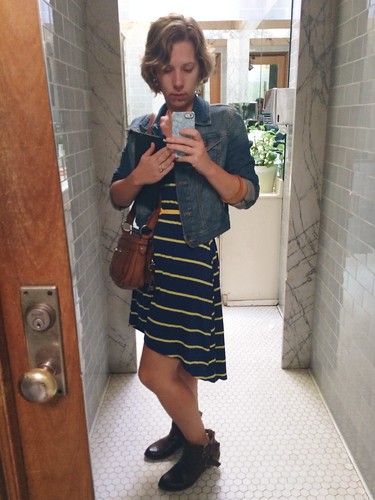 Snapped this in the bathroom at my therapist’s office building before running off to a coffee meeting, 2 phone calls and a boat-load of emails. It turned out to be a pretty successful day.

Originally, another dress was on my mind for day 3, but once I was out of the shower the original pick felt too heavy / clingy / formal. Enter one of my favorite things – jersey – and this dress was much more in line with the mood / energy I needed for the day. It served me well.

The purse was a bridal shower gift from my cousin and his wife. The dress and boots are from Kohl’s. Jean jacket is from Forever 21…But the magic is in that tiny yellow belt.

I pulled if off of a black & white dress from Kohls, which I wore for the rehearsal dinner of my wedding weekend. (You can see the very top of that dress here.) Some how, a few months after getting styled, I had this epiphany that I can mix and match things – like, actually cut pieces off of one item to wear with another. The belt was originally attached to that dress – it was like a crazy light bulb going off in my head when I realized I could snip the ties and use it with any outfit. I felt like an f-ing genius, that I’d somehow graduated to a new stage of personal style. ::boom::

One time, I read that Ann-Marie always adds a yellow accent to any scrapbook page she’s working on. The answer is always yellow.

And being that navy is my life, yellow is an obvious accent color – that basically never occurred to me until I was daredevil enough to snatch that belt from one dress and wear it with another.

So there you have it. Keep your eyes peeled for more of that yellow belt, I promise it’ll show up again. 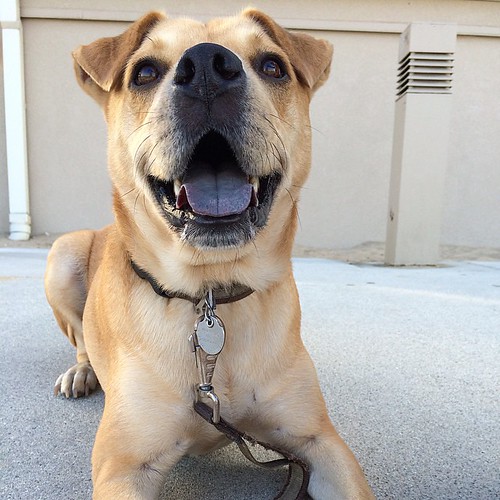 As you know, I launched 30 Days of Dresses this week. Woo! Thanks for all of your comments 🙂

I loved this Complete Guide To Structuring Your Ideal Work Day, especially the idea of brushing your teeth at 2:30pm. While I’m continuously trying to find the right daily and weekly routines that support my energy levels and introversion, this seemed like a great guide for any office worker bees.

Abby Kerr, who ran the INFJ business class I loved (it’s coming back!), has a real knack for linking to amazing posts. Follow her on Twitter.

Abby shared Allie’s post on the care and feeding of new moms. A few of my friends are new(ish) mom and I admit, I had no idea how to help them. And because I love offering help, supporting people and receiving help myself when I’m down in the shit-time of any life change, I felt completely useless as friends to these women. This post will be my reference material now.

Back to introvert’s dreams, here’s a list of things only people who love spending time alone will understand (I think my sister gets credit for texting me this). This is seriously alone-time indulgences and I could spend a month just going through a challenge checking items off this list.

I am loving the National Geographic Your Shot Blog. Animals, nature, culture and gorgeous pics? I’m in.

To follow that up, living off the grid / what people miss about living in the wilderness. This pretty much sums up my broken heart after Alaska.

And finally, Pink Ronnie has reevaluated her blogging / storytelling, shuttered her Pink Ronnie blog and launched The Shoemakers Daughter (tho today the link isn’t working 😦 ) I love her style, story-telling and photography. I would love to take a class with her in person and am book-marking her Life Captured online courses.

That’s it for this weekend. Enjoy xo