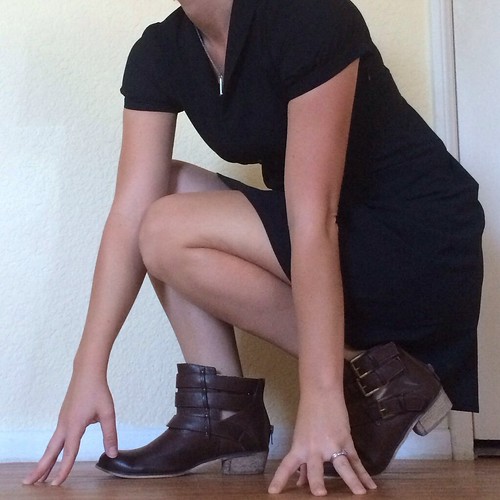 Or the plight of this little black dress…

I’m realizing quickly that 30 days of my own outfits is starting to feel a little… self-indulgent. It would be silly to think that anyone wants to read about dresses when they come from stores like Kohl’s or H&M, or see 30 pictures of me.

I snapped this on Thursday – it was a helluva day at work. I ended up taking the afternoon off because, like all first world white girls, I COULD NOT EVEN.

So the combo of needing a boost of creative time in between meetings, and the self-consciousness of not wanting to post 30 selfies, produced this photo. And I thought about my friend Nina who takes these awesome self-portraits and a whole world of options expanded before me.

Yes – it’s #30daysofdresses – but more importantly, it’s 30 days of sharing my creativity, my story, of me inside and out.

So that’s where I was at when I took this photo.

I’ve owned this dress for a very long time… definitely before I moved to LA.

When I first moved here and started working at my internship, I had a boatload of new business clothes (thanks mom!) from Ann Taylor Loft and was basically terribly overdressed for the occasion. One day, a coworker said “You wear a lot of black” as if this wasn’t a good thing. “Well, I’m from New York,” I said, because in New York everyone wears black (just look at my Google search). It’s classic, powerful and creates a good silhouette. Plus, people are hardworking, driven, serious – any pop of color, like the crazy teals and neons LA-ers wear – could be seen as not taking things seriously enough.

And who the f-has time to be all bright and happy when it’s 30* outside and you’re working a 10hr day?

As I shopped for myself and tried the SoCal style on for size, I started pulling navy, instead of black as my base neutral. I didn’t realize this until Jess pointed it out. Awesome. So what do I do with this black dress I didn’t care much about? Jess suggested I keep it, since it was cute, light-weight and versatile.

Then another 18 months went by and I didn’t wear it.

It wasn’t because it didn’t fit right, or it was black, or that I don’t own black boots (working on that).

It was because the last time I wore this dress, I wore it to a funeral.

It was July 2011 and we had plans to be on the east coast for our two engagement parties (long story). One in PA and one in NY. A few days before our departure, we woke up to a slew of calls on H’s cellphone saying that his granddad had passed away overnight.

I don’t remember the actual timeline of things, if we flew in early or traveled back and forth from PA to NY a few times, but it was such a huge blow to H’s mom’s side of the family – completely unexpected.

His grandfather was quiet, but super warm and friendly, and so kind-hearted. He really was the nicest. He always treated me like I was part of the family, long before H and I were engaged.

And this is the dress I wore to his funeral – the only part of which I remember being in a room where people were giving speeches about him – and we were all laughing and crying. There was music. I hung out with H’s little sister who seemed to know that I needed the company more than she needed me – mostly b/c this wasn’t my family. I felt a little out of place. And I just remember, as everyone wrapped up the speeches and went to move on to the restaurant, people picking up purses and organizing carpools, I started to cry. H hugged me and I remember saying into his chest, “It’s just so sad” because it was.

We’d lost a really good person. I could cry writing this.

Some time later, I remember his daughter, H’s aunt, saying that now when she sees monarchs, she thinks it’s her dad visiting her. And our LA neighborhood is full of monarchs, so now I always think of him too. And of course, when I wear this dress.

Dress is Old Navy. Boots are Kohl’s. Necklace is the shape of an arrow.