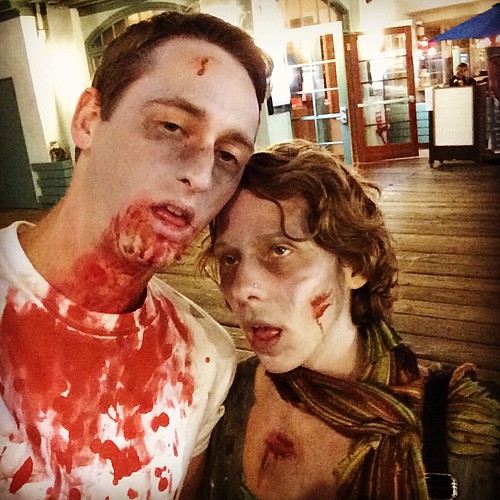 Happy Halloween from us, the literal walking dead.

We’re kind of obsessed with AMC’s The Walking Dead so when H found a zombie bar crawl, I was all for it.

Cue the fake blood, slashed clothes from the thrift shop and white make-up.

I think we did a damn good job, especially since so many people who attended this ZOMBIE bar crawl didn’t dress as zombies, or even anything.

(Why do people go out on Halloween sans-costume?)

We now have enough fake blood for costumes for ourselves and future kids for the next 5 years. Sheesh.

Fav moments of the night:

Dancing with H at one bar, standing outside under heat lamps chatting with T at another. H pretending to zombie attack our friends while I snapped a photo (major photoboming abilities) Best costumes were fully suited up ghost busters and I spotted more than one Mary Poppins (I’m thinking zombie Mary Poppins is a great outfit for my future costumes list). All four of us eating nachos at the last bar. The downpour of rain. Running back to the car in the rain (it never rains here – this was a big deal!).

We bar-crawled our way through Santa Monica. H was a viking (his beard was hand-made by his sister), my sister was a volleyball player who’d been hit in the face with the ball, our friends were Axl Rose and Slash and a Jack & Coke couples’ costume, and I was Piper Chapman, neurotic inmate and star of Orange Is The New Black. (Which is hilarious and I recommend you get on it now.)

Even Carter was dressed up in a gold cape my sister let him borrow.

Sometimes I dread these social outings – the costumes, the crowds, drinking on a school night – but this morning I realized (as I do again and again) that life is short. This could very well be the first time I bar crawl with my sister on Halloween, and the last. Not in a dramatic way, but in a life change’s way. Next year we may not dress up, may not be into partying, may not have friends available to hang out with us. It’s important to enjoy these chances we get to spend time with the people we love.

And mark those holidays with costumes and shots of whiskey 😉

Took this with my Olloclip a few weeks ago. We had some pretty crazy spiders in the house. Caught this one in a drinking glass and kept it for a bit to photograph. Released it outside afterwards. Because of all my traveling, I’m not celebrating Halloween this year, but that’s OK by me. I’m so tired, I never want to leave my house. This happens when I’m away from awhile. Hoping I’m back in balance by next week.

Until then, I’m drinking honey jack and cokes with my sister, watching Walking Dead and nesting in. It’s dark early now. The gray fog rolls in each morning. It was so hot there for so long I thought we’d never get back to my favorite coastal LA weather. But here we are – those season changes like a flip of a switch.