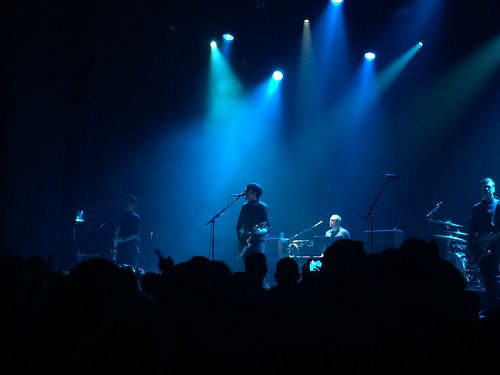 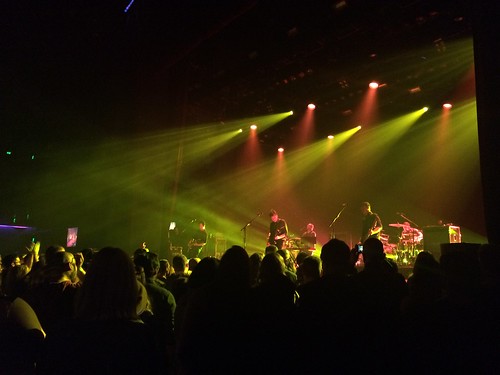 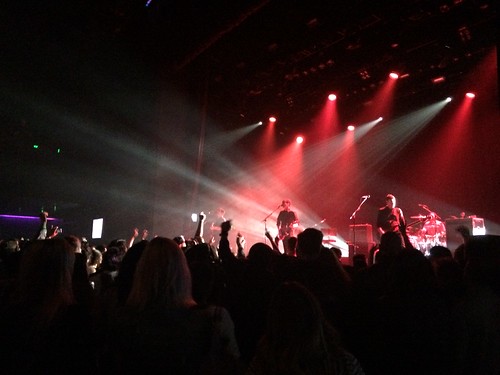 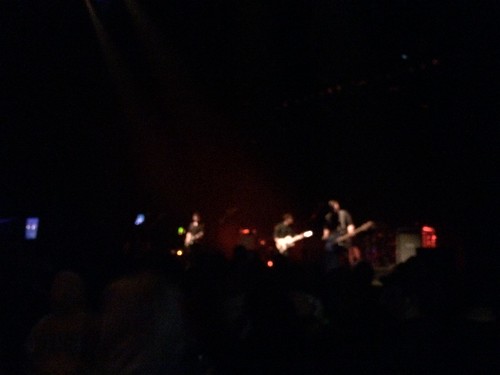 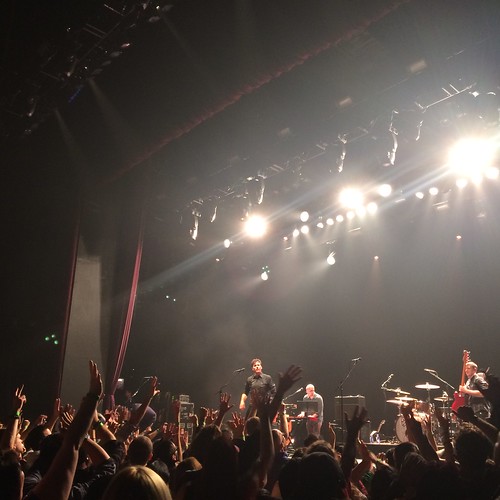 On November 2nd we went to see the closing show of the Jimmy Eat World’s Futures x10 tour at Club Nokia in Los Angeles. This is the same venue we saw them play Clarity x10, though for that show we had seats in the balcony. This time, we were committed to GA floor – and it was awesome.

We saw the opening show of the Futures x10 tour exactly one month before – if you remember, this is when I saw the band on the street and almost threw up from panic. It was really great to see them play the opening and closing shows of the same tour, especially since this involved the first 13 songs of the set list being the same. I could tell they’d gotten into a groove over the month-long tour. The songs, the time in between songs and the whole band just hummed.

This show, we were in Joshua Tree the day before and the morning of, so I knew we didn’t have the energy to do anything but stand and watch the set. Even in my exhausted state, knowing I had to travel to Boston the next day, I still loved every minute.

During the sound-check, the tech came out with a gorgeous blue bass on. “The bass player’s bass is so blue,” I said to H. “Yeah, that’s the one he always plays,” H said. “Oh – I never noticed before,” I replied.

It got me thinking – I’ve seen this band live almost 10 times, they’re my favorite, hands down, and I’ve never really watched the BAND play. I’m so fixated on Jim Adkins that the rest of the band blurs into the background.

A few weeks ago, my friend Joanna got to meet Jim Adkins after the show in Virginia. She made sure to take a selfie with him to send me. She said he is the nicest guy ever and that they really do just hang around the venue after the show, getting dinner and talking to fans.

Again, with the Jtree trip and the flight to Boston the next day, I knew we couldn’t hang around to meet them – but I feel like we’re getting closer. One day we’ll hit up a show and make time and get to meet them. For sure. In the meantime, I’ll wait patiently for their next album and tour.

Bonus – the band takes a pic of the audience each night and we made the cut. You can see H’s hands as the highest ones on the bottom left side of the pic below – he’s wearing a black t-shirt. I’m somewhere to the right of him and our friend is also standing there with us.

So it was a low key concert for us but totally worth the experience. Seeing the band 2x in one month did nothing but turn up the volume on my love for them. :sigh:

Check out the set list from the show. I was thrilled they played Dizzy (my other favorite besides Polaris and 23) and Jim talked a bunch during this show. He said he appreciates people still coming out to see their shows. It’s the “hugest compliment”.

I’m lucky I live in LA – a city they play in often. Their songs have impacted so much of the past 10 years of my life. Thank you to them for keeping on. 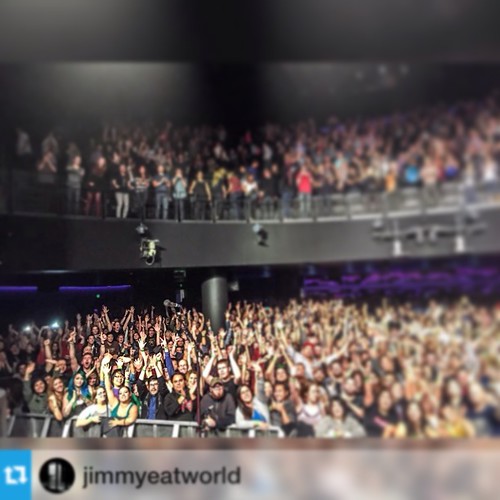 I attended the ASCAP I Create Music Expo in Hollywood, CA last week. This year’s event went a lot faster than previous ones, but it felt less inspirational in the sessions. That doesn’t mean I didn’t leave inspired. Katy Perry, Stargate, Ne-yo, Mike Posner and composers James S. Levine and Michael Brook shared their stories, careers and songwriting experiences. But what challenged me was something someone said during a lunch I hosted for work.

The event was for 10 people and had basically finished. The check was paid, most of the attendees headed off to their next panel. But I stayed chatting with an older guy. And as he spoke, I could hear a Philly accent. And he started to tell the story of what a teacher said to his class back when he was a student. Then he said my name (which people do not tend to do). It caught my ear.

Justine. Now I’m paraphrasing what this guy said, but he basically told us ‘Don’t be intimidated by this anymore. It’s just music. These are just tools.’

I felt the world slow down. Anyone else feel that?

It didn’t seem so. Even the man telling the story carried on to his next thought. But I felt like this was a direct message from the Universe. And the SECOND ONE of the week for that matter. The 3rd picture up top is from my girl’s day in Ventura, where a friend pulled a few Goddess cards for me and that’s what came up:

It’s been a long time since I’ve written songs or even thought of myself as a musician. It feels too complex to get into now (I explained some here). But I’ve felt the struggle come up between work and creativity again. How I spent the past 5 weeks dumping my creative and physical energy into my job, without leaving any time or space for my own creative work. And while I need to do my job to the best of my abilities, going above and beyond seems to be an excuse to ignore deeper creative work.

And that’s what I think I’m being hit over the head with by the Universe.

So I took that photo above with the “I am a songwriter” speech bubble on purpose. Y’know, the whole fake-it-till-you-make-it thing. Guess we’ll see where this goes.

Met a friend for coffee today and we hung out a bit, chatting about work and then deeper stuff. I shared with her some of my hesitations / hang-ups around music. I respect her as a musician and I really like the songs she writes, even though pop music isn’t my go-to choice.

She encourages me (and I quote) to write an EP, record it and then do a two week tour with her this summer, which seems so ludicrous that I’m actually toying with the idea. Here is someone I like, who I believe has talent, and is interested in me finding music again.

When I really think about it, I miss it. And anything related to it feels scary as hell. But I also feel like I have a few songs left in me.

It’s been so long since I’ve written anything… like 8 years.

But last night we were at dinner with a bunch of people who live in our neighborhood, organized by a musician and a comedian, and I chatted with a choreographer, and dammit – if I don’t miss the creative spirit. If I don’t want to have something to contribute.

I don’t know. Just using this space to throw a marker down, as I sit in my bed with the Bon Iver station on Pandora on a Friday night. So I can look back as say “What a crazy idea” or “This is where it all started”.

Out With The Old, In With The New

For my 29th birthday last week I gift myself the help of a stylist. I met Jess through her boyfriend, an awesome songwriter named Hughie. (Video of him here) Her dream is to style bands, and she’s already built a great credit list. When she and I met a month ago for coffee, I asked her what she could do for little ol’ me. Turns out, she does “closet consultations” and “shopping trips” for just about anyone. We talked dates and fees, and before I knew it, she was in my bedroom helping me sort through and donate 7+ years worth of clothing.

On Saturday, we spent  almost 2 hours going through everything I had in my closet and dresser. She kept a running list of what I had to mix and match and what I needed. And then we headed to Ann Taylor LOFT for a bit of shopping. Nabbed a couple of basics and one dress that, when I put it on, it made me so happy I almost cried. Amazing.

We ran out of time Saturday, so Sunday it was round two. We were at the mall when it opened and spent most of our time methodically shopping through Forever 21. Now, I haven’t shopped in a long time, but I am sort of a hater when it comes to crap clothing. BUT after shopping with Jess, I see the value (low price, trendy fashion) of a place like Forever 21 (…when it comes to style. when it comes to sustainability, I am going to keep my mouth shut).

She and I found some awesome pieces, including a blue faux leather jacket, a hot-hot midnight blue dress (date night!) and finally a pair of colored jeans (green, of course). And then the kicker, I bought 8 dresses! EIGHT.

My wardrobe is completely revamped. I am in love. I’ve only had a chance to wear one outfit (today’s) but I can’t wait to wear everything.

To top it all off, today I received a “cheat sheet” email from Jess detailing outfit options, what I can wear with what, and future things I may want to buy. It was the perfect gift for myself to (be)come into my own in this 29th year. As Hughie would say: BOOM.

You can find tons of style tips on her blog Hell or High Fashion (whose name I just adore).