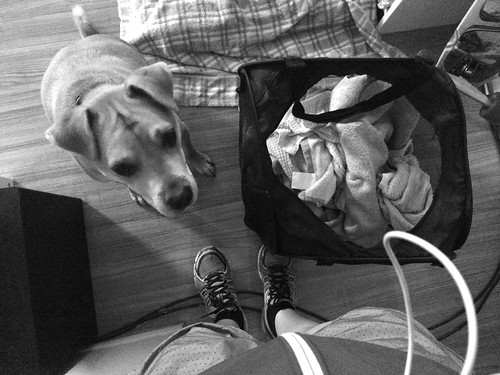 Had a super productive week both at work and home because I am traveling a bunch in the next 2 weeks. By the time you read this, I’ll be in Denver visiting my friend Chelsea, where apparently it’s going to be a low of 14*. I’ve packed 3 sweaters and my puffy down “sleeping-bag” coat to keep me warm while we bike, eat, drink tea, and spend mucho quality time together.

And also my Twitter conversation with Yvette Nicole Brown where we chatted about the Serial podcast. She is my favorite guest on the Talking Dead (she has pages of notes about each episode).

OMG the Serial podcast. Hoping to write a longer post on this eventually, but I am loving the narrative form, the voices, the music. I don’t care so much about the who-done-it as much as the storytelling process in the series. The Slate Serial Spoiler Special is the podcast-about-the-podcast and a critical discussion about both the unfolding of the reporting and the way it’s being reported. So meta.

I share Elizabeth Gilbert’s Facebook statuses (stati?) a few times a week. I love her updates, her words, her take on life.

We saw Interstellar last weekend (I liked it, was glad we saw it in the theater too) so of course I am drawn to stories about people’s experiences in space – An Astronaut Reveals What Life In Space Is Really Like.

On the last two nights of my final flight, I slept on the flight deck, my sleeping bag strapped beneath the overhead windows. The position of the shuttle put Earth in those windows, so when I woke up the whole world was out there in front of me—in that moment, just for me alone.

And cuz I’m not one to miss a list: The Top 10 Mistakes in Behaviour Change (and How to Avoid Them). My favorite is mistake #4 “Trying to Stop Old Behaviors Instead of Creating New Ones”. This def works for me. I like how he included further reading links.

And on that note – Can Absence Make The Mind Grow Fonder. I’ve found when I stop consuming something (purchasing clothes, drinking alcohol, eating Oreos, posting on Twitter etc) I don’t miss it. Yes, there’s the initial moment of going for the thing and realizing it’s not there (or I made a choice to avoid it) but then after even a few short days, it’s like, whatever. I do agree on the substitution part, which supports what I liked about mistake #4 in the above paragraph.

Have a great weekend xo