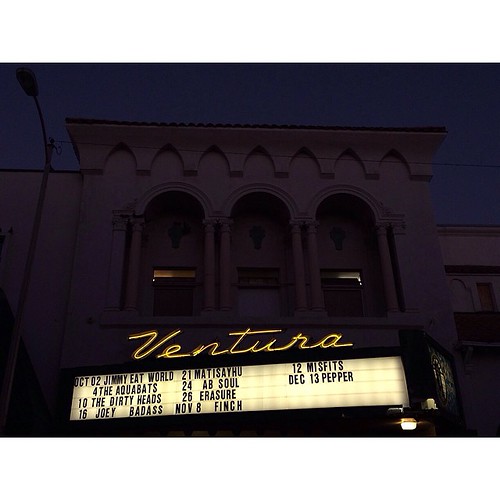 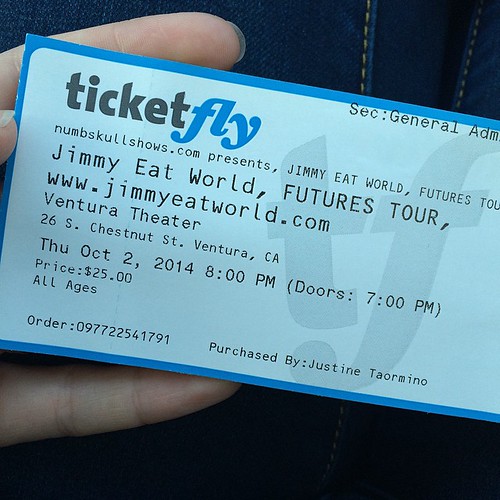 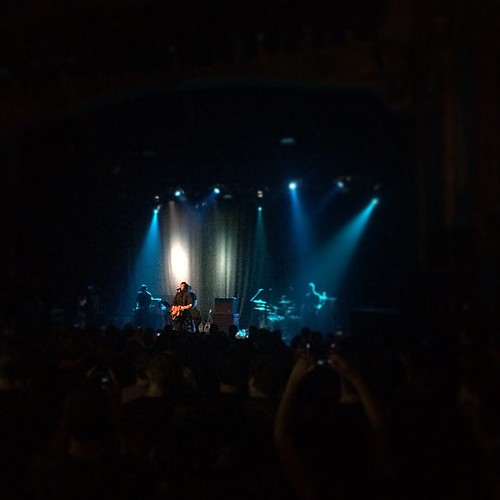 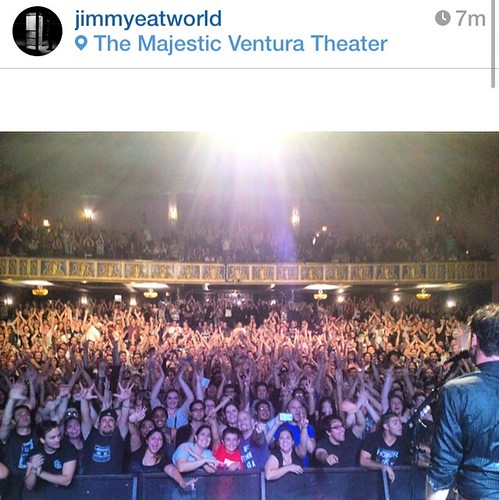 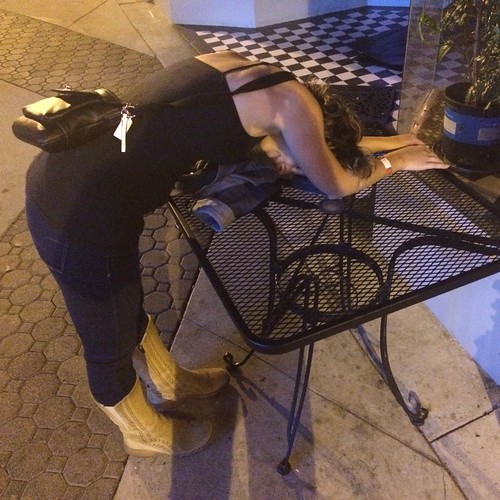 The table 3/4 of the band ate dinner at.

Last Thursday night, H and I drove up to Ventura to see Jimmy Eat World play their Futures x10 tour opening show. It was a very hot day, and I’d had an incredibly stressful morning at work, so my mood was quite blah. But Jimmy Eat World is my favorite band, and they would be playing my favorite album, so I had hopes the afternoon would improve.

We found a primo parking spot and ate dinner at Anacapa Brewing Company. It was good, but not amazing.

As we walked up Main Street towards the Majestic Ventura Theater for the show, we walked RIGHT PAST Jim, Rick and Tom from the band while they sat at an outside table eating dinner!

I thought I was going to throw up.

I never bother famous people *ever* but this time I felt justified to stalk them. I just wanted a photo or an autograph, just to shake their hands as say “We love your music – please keep going”. So, H and I stood 50 feet away, watching them like total creeps, not wanting to interrupt (though maybe they shouldn’t sit at an OUTSIDE TABLE one block from the venue if they don’t want to be bothered).

As they got up to leave, I walked after them – they looped into the restaurant and into the back. Were they using the bathrooms or heading out a back exit? Arg. Basically, we missed them completely.

As we stood in line to get inside the GA show, I watched as each band member walked alone, from different routes, right by crowds of people to get onto the tour bus parked in front of the venue. I think I was the only person who saw Jim walk the entire block. Fans were oblivious, staring at their cell phones or talking to each other. My heart skipped watching him, but I didn’t blow his cover. :sigh:

The show itself was good – they seemed a bit rusty, but it’s the first night of the month long tour. (See the entire setlist). The songs from Futures that really rock live still did (Pain, Work and Kill) and the ones they usually don’t play, I understand why. Polaris is seriously in my top 3 but it wasn’t as intimate live as listening to it on headphones. Drugs or Me was really great – I was dreading it b/c it’s so slow – but the new guitar player / background vocalist / keyboard player added so much with his vocals that this song flew.

They hit this amazing rockin’ out stride during Nothingwrong – it sounded amazing and they killed it then. I didn’t realize it till I was writing this, but their first encore included 3 songs from the Stay On My Side EP which came out right after Futures. Duh. It was smart for them to include them right after, a continuation of the catalogue. According to the setlist website, Over and Closer made their debut the other night (pretty cool to say we were there) and Disintegration hasn’t been played live since 2008. Hearing these songs live made me want to revisit the EP. Listening to it now as I write this.

(Also, fun fact which I some how just discovered: Heatmiser, which is a band Jimmy Eat World quotes in the lyrics of Kill: “like you’re favorite Heatmiser song goes”, had the Elliot Smith as their lead guitar and vocals guy. How did I not know this until now?)

We have tickets for the final show at Club Nokia next month. I’m excited to see them play the same show again. It’s awesome we’re seeing the first and last shows of the same tour.

This is the 6th time I’ve seen them live, the 3rd x10 show (Clarity and Bleed American happened over the past 4 years), and the first time I’ve seen them outside of Los Angeles county. We bought t-shirts at the merch table. I spotted them on the street and almost talked to them. And I sang along to every song.

It’s like I really almost am a super fan.